DNA - The Fingerprint of the 21st Century

DNA has the power to prevent crime, exonerate the innocent, convict the guilty and bring justice to victims.

New York’s DNA Databank was created to maintain DNA profiles of convicted offenders so law enforcement officials could identify perpetrators of crimes when DNA evidence was retrieved from a crime scene. The DNA Databank began limited operations in 1996. DNA samples were collected from individuals convicted of homicide and certain sex-related offenses. Since that time, the law that created the Databank has been amended five times to expand the number of crimes that require a DNA sample upon conviction.

The latest expansion took effect on August 1, 2012. Effective that date, designated offenses include all felonies in any State law and Penal Law misdemeanors, with one limited exception. The law applies to any defendant convicted on or after August 1, 2012.

The law is not retroactive and does not apply juvenile delinquents, youthful offenders or first-time offenders convicted subdivision one of Penal Law §221.10, criminal possession of marihuana in the fifth degree ( possession of marijuana open to public view or burning). In addition, the law expanded a defendants’ access to DNA testing and comparison before and after conviction, including after a guilty plea, in certain circumstances. It also contains provisions that allow will defendants, in limited circumstances, to seek post-trial discovery of evidence to demonstrate their innocence (L.2012, ch.19, eff. Oct.1, 2012, amended L. 2012, ch. 55, eff. August 1, 2012).

In addition, the law expanded defendants' access to DNA testing and comparison before and after conviction in appropriate circumstances. It also contains provisions that allow will defendants, in limited circumstances, to seek post-trial discovery of evidence to demonstrate their innocence.

Each expansion of the Databank has enhanced its effectiveness, because criminals don’t specialize in the types of crimes they commit. DNA samples taken for minor or non-violent offenses – such as petit larceny- have solved murders, rapes and removed dangerous criminals from their communities: 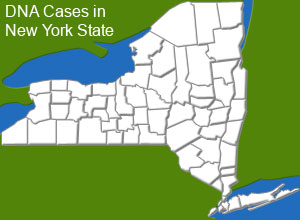 A discussion about the importance of
New York State’s DNA Databank.