Five Other Officers Honored with Nomination 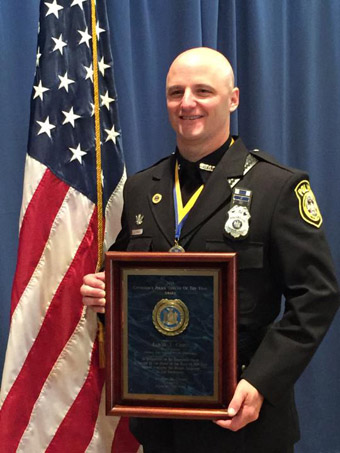 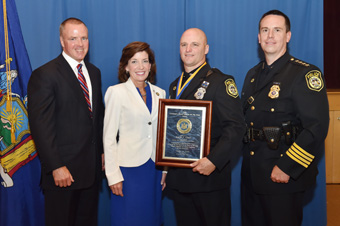 Governor Andrew M. Cuomo today announced that Johnson City Police Department Patrolman Louis J. Cioci is the recipient of the New York State Police Officer of the Year Award. Patrolman Cioci was recognized for his actions in response to an incident in which a gunman killed a fellow Johnson City police officer and then opened fire on a busy street. He is credited with preventing the shooter from harming civilians caught in the midst of the dangerous event. A photo of Patrolman Cioci is available here.

“Patrolman Cioci exhibited incredible valor and professionalism under extreme circumstances, which ended a very dangerous situation and saved lives,” Governor Cuomo said. “On behalf of all New Yorkers, I thank Patrolman Cioci for his bravery that day and for exemplifying the very best in New York's law enforcement officers.”

Lieutenant Governor Kathy Hochul presented the Police Officer of the Year award to Patrolman Cioci on Governor Cuomo’s behalf during a ceremony this morning at St. John’s Memorial Center in Johnson City. More than 150 people attended the event, including Patrolman Cioci’s family and department colleagues; the family of Patrolman David W. Smith, who was killed during the incident; state and local elected officials; and law enforcement professionals from throughout Broome County.

“No amount of training or time on the job can prepare an officer for the circumstances Patrolman Cioci faced last year,” Lieutenant Governor Hochul said. “Yet his unwavering courage and poise under intense pressure helped him bring the situation under control without injury – even with many innocent bystanders within close proximity of the gunman. On behalf of Governor Cuomo, we as New Yorkers are proud to celebrate in his heroism and honored to present him with this coveted award.”

Patrolman Smith responded to a call on Harrison Street, located in the middle of the Wilson Memorial Hospital Complex in Johnson City, at 7 a.m. on March 31, 2014, after receiving a report of a male employee from Southern Tier Imaging acting erratically. Seconds later, the man attacked Patrolman David W. Smith and grabbed his service weapon, shooting him in the head and killing him just as Patrolman Cioci arrived.

Patrolman Cioci ordered the gunman to drop the weapon, but the suspect began firing at him instead of complying. Rather than immediately returning fire, he paused, allowing several bystanders near the gunman to take cover. Once the area was clear, Patrolman Cioci fired from a distance of about 30 yards, striking the gunman six times.

Despite being shot in the torso, leg and face, the gunman violently struggled as Patrolman Cioci attempted to arrest him. The injured gunman tackled him, attempting to grab his service weapon. Patrolman Cioci shot the man twice more during the confrontation in an effort to end the attack. With the help of two hospital security guards, he was able to handcuff the still struggling gunman and take him into custody. The man died of his injuries at the hospital a short time later.

Johnson City Police Chief Brent Dodge said, “There is no doubt in my mind or the minds of the men and women who witnessed the event that Patrolman Cioci's heroic actions and unparalleled performance under some of the most stressful conditions imaginable saved the lives of many innocent New Yorkers that morning."

Division of Criminal Justice Services Executive Deputy Commissioner Michael C. Green, who serves as the committee chair, said, “Each year, the Committee reviews nominations that exemplify what it means to serve and protect. Patrolman Cioci responded to a nightmarish scene, witnessed the execution of a fellow officer and friend, and then engaged in a life-and-death struggle with the individual responsible. His composure during these horrific events ultimately protected the lives of many others. On behalf of the entire selection committee, I am honored to recognize him for his heroic efforts.”

Patrolman Cioci has served more than 15 years with the Johnson City Police Department and is a member of the agency’s SWAT team. Previously, he was a deputy with the Chenango County Sheriff’s Office and an officer with the Owego (Tioga County) Police Department. A native of the Broome County town of Maine, he graduated from Maine-Endwell High School and attended Broome County Community College. He and his wife, Kristin, have two daughters.

The Police Officer of the Year Award was created in 1983 to recognize a single police officer, or team of officers, for an exceptional act of valor symbolizing the service of police in New York State. The award was first presented in 1984.

Patrolman Cioci is the first Johnson City police officer to receive the award. Patrolman Smith had been nominated for the 2002 award: He rescued a sleeping, 4-year-old boy from a burning apartment building in the early morning hours of Jan. 17, 2002. A complete list of past recipients can be found here: http://www.criminaljustice.ny.gov/ops/poya/recipientspast.htm.

Since the award’s inception, 108 officers from 17 agencies across the state have received it. Of those police, 69 have been honored posthumously, including 23 officers from the New York City Police Department and 37 members of the Port Authority of New York/New Jersey Police Department killed during the terrorist attack on the World Trade Center on Sept. 11, 2001.

Five other officers were nominated for incidents during 2014. These officers will each receive a Certificate of Exceptional Valor from Governor Cuomo:

Officer Daniel Callahan of the University Police at SUNY Canton (St. Lawrence County): On April 22, Officer Callahan observed a young man on a foot bridge with a rope around his neck preparing to attempt suicide. Officer Callahan ran to the man and tried to grab him before he could jump. When this was unsuccessful, Officer Callahan quickly cut the rope with his knife, dropping the man into high, fast moving water. He then swam to the man and pulled him to shore, where he was assisted by other responders.

Officer Michael Konatstotis of the New York City Police Department: Officer Konatstotis was nominated for five different events: on Feb. 2, he disarmed a knife-wielding individual on a public street; no one was injured. He saved the life of a 15-month-old child by performing CPR on March 9; he intervened as an emotionally disturbed individual attempted to push a fellow officer onto subway tracks, ending the struggle without harm to anyone on July 30; he performed life-saving CPR on a woman in cardiac arrest on Nov. 4; and on Dec. 9, he again performed life-saving CPR, this time on an elderly man with the assistance of EMS personnel.

Officer Zachary McKinnon of the Poughkeepsie Police Department (Dutchess County): During the midnight shift on May 24, Officer Zachary McKinnon and Officer Renee Knapp responded in separate patrol vehicles to a call of an emotionally disturbed person. Upon arrival, the man immediately attacked Officer Knapp with a razor, slashing her repeatedly while she was still in her vehicle. While Officer Knapp attempted to defend herself, Officer McKinnon fired his weapon multiple times at the man, allowing Officer Knapp to flee from the attack. The suspect was killed.

Officer John Scaramuzzino of the Utica Police Department (Oneida County): On Oct. 11, Officer Scaramuzzino was on patrol with a New York State trooper near a local bar when they observed a man shooting a handgun into a gathering of patrons that had just left the establishment, injuring four people. The assailant then ran through a parking lot with Officer Scaramuzzino and another trooper chasing him on foot. Officer Scaramuzzino encountered the assailant as he rounded the corner of a building and exchanged gunfire, incapacitating the man and ending the pursuit. The suspect survived and is serving a 15-year prison sentence.

Trooper Bruce J. Stoffolano of the New York State Police (Troop D): On April 25, Trooper Bruce Stoffolano was dispatched to a residence in West Winfield, Herkimer County, for an armed man threatening to kill people inside. Upon arrival, he was confronted by the man, who was holding a large knife and had an electrical cord wrapped around his neck. Fearing for his own safety as the man closed in on him, Trooper Stoffolano fired one round at the man, immediately ending the threat and allowing him to render first aid to the distraught man.